Hulk vs. Thor VS Hulk vs. Wolverine 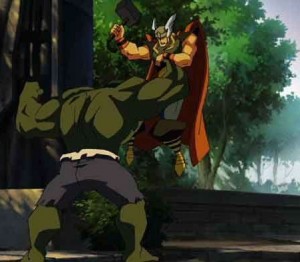 Back in the day when I first started branching out from reading Spider-Man comics, I was drawn in by a little limited series called the Inifinity Gauntlet.  I was fascinated by everyday heroes fighting against and amongst cosmic beings.  The thought of Captain America making a stand against somebody like Thanos was awesome and awe-inspiring.  Now that you know my cosmic leanings, you may have guessed which of the two “movies” on this disc that I preferred.

While Thor clocks in as the longer movie of the two, it is totally worth it and makes quite the smashing punch.  I’m not well versed in all the relationships in the Thor corner of the Marvel-verse, but I didn’t feel at a loss as it was easy to pick up on what was happening and who was involved with who, etc.  It was amazing to think about how once Bruce Banner was removed from the psyche of Hulk that he might truly have no upper limits to his strength, endurance, and mindlessness for destruction.  If Hulk can (Spoiler Alert!) beat the tar out of Thor and take out pretty much everybody in Asgard, how would the writers resolve this plot!  Very well and by thinking about the Hulk’s Achilles Heel, that’s how.  I am a big fan of cosmic/god-like characters with great action and Hulk vs. Thor delivered.

On the other hand, we have a more down-to-Earth “Hulk” story.  I put Hulk in quotation marks because this story seems to focus more on Wolverine and his encounter with the Weapon X project with the Hulk thrown into the mix to stir up the pot.  Now I love seeing Lady Deathstrike torn apart as much as the next guy, but I can’t be the only one who found the one scene with her and Hulk screaming at each other pretty funny, right?  I appreciated seeing Deadpool getting his ass handed to him…even though he’s funny, it’s good to see him get a good pounding every now and then.

Overall, I like seeing the Hulk in vs. Wolverine, although it definitely felt like he was an ingredient and not the main course as he was in vs. Thor.  I give the Thor segment 4 stars out of 5 and the Wolverine one 3 stars.  May the Hulk continue to smash for many years to come.