The planet’s not called Hulk, but the movie title is…called Planet Hulk 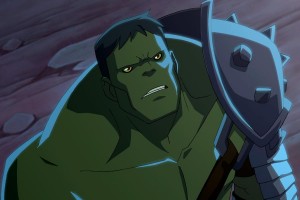 I grew up loving Spider-Man.  (A weird way to start a review of Planet Hulk, but go with me here).  I started with issue 248 way back in the day and my mom purchased it for me at a local drug store.  She said to go over to the spinny rack and pick one out.  Sweet!  My 8-year old eyes perused the racks and I had narrowed it down to the one with a bad guy looming over Spider-Man and one with a big green monster on the cover.  I chose the webhead because the other one frightened me too much.  Yikes!

I don’t have that same fear of the Hulk now that I did then, however, so I was able to really enjoy Planet Hulk.   And this one was a great movie.  It had an emotional core with the Hulk and Caiera and great fighting scenes in the gladiator-style arena.  You can’t beat the ones in the beginning where the Hulk is just trying to get out and doesn’t play well with others, but when he joins the fight, it’s over pretty quick!  Hulk does indeed smash.

One of the scenes that has stayed with me weeks after I have watched the movie and is the most heart-wrenching is when Caiera attempts to save a little girl from the second invasion of the spore-things.  Truly sad and gives this film weight and makes it not merely a superhero movie, but a film with depth that will have you rooting for the Hulk and enjoying the beauty that is this movie.