Superhero Cinema is entering a new era, i’ve moved the site to a new platform, WordPress, I hope you like the new design for the site.  It should still keep you informed about the latest news from around the web, but also help highlight our own content better.  There should also be none of the glitches caused by our old software.

Please go ahead and use the Contact Us form to let me know how you like the new look and the new functionality.

In the meantime, the old design server us well for 3 years, and all through our podcast time.  Here’s a last look at that: 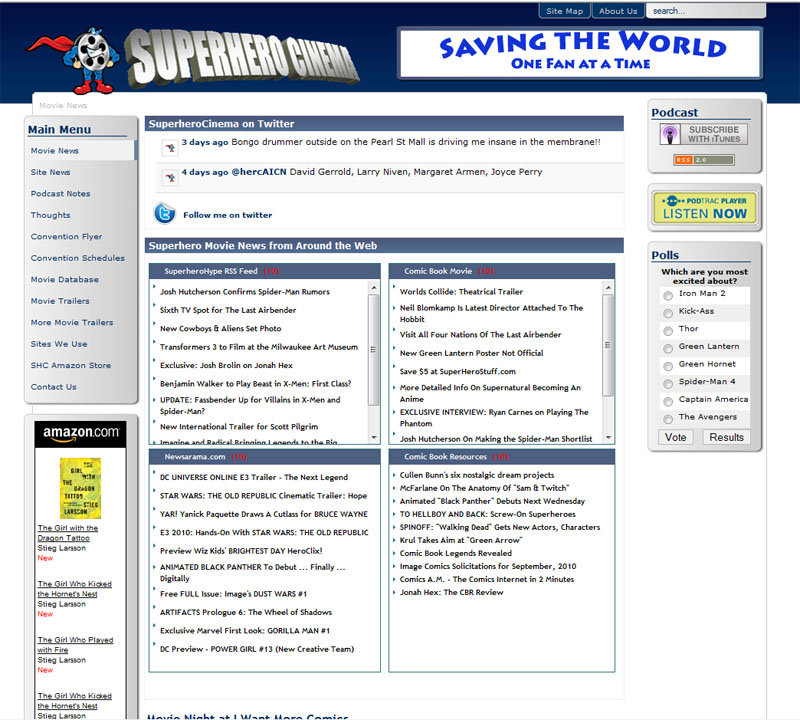 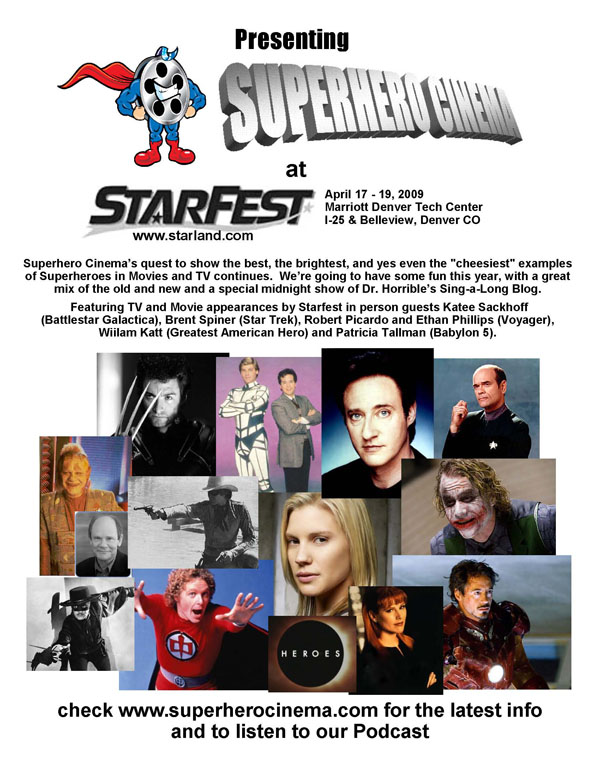 Superhero Cinema’s quest to show the best, the brightest, and yes even the "cheesiest" examples of Superheroes in Movies and TV continues. We’re going to have some fun this year, with a great mix of the old and new and a special midnight show of Dr. Horrible’s Sing-a-Long Blog. Featuring TV and Movie appearances by Starfest in person guests Katee Sackhoff (Battlestar Galactica), Brent Spiner (Star Trek), Robert Picardo and Ethan Phillips (Voyager), Wiilam Katt (Greatest American Hero) and Patricia Tallman (Babylon 5).

Midnight Go to Panel Room 1 (The Aspen Theater, near the Atrium)
For a special screening of Dr. Horrible’s Sing-A-Long Blog

For more detais on the Convention go to http://www.starland.com

There may be some glitches this week for a couple minutes at a time as I move webhosts.  All should be fine by next week.  Get ready for news about Starfest 2009 soon.  April 17-19 http://www.starland.com

All the details are finally worked out, i’m going to my first San Diego Comic-Con International tomorrow.

The schedule is a little daunting, all the panels on the latest TV shows and Movies!  I’m going to try to see as much as possible.

Here is a link to the schedule

We do hope to have shows again soon, I need to get back in touch with the guys.  It’s been a really hectic year.  Maybe my Comic-Con report will be the perfect excuse.

I’m having server problems with the site, my web host is complaining that the site is using too much CPU on the shared hosting, i’m disabling the news component for right now until I can figure it out.  I apologize if you come here for your Superhero Movie News.  Here are the sites that the news feed uses:

I’ve swapped around the 11am and Noon program slots on both Saturday and Sunday, I don’t want my stuff to have to compete with Masi Oka and Nana Visitor.

I won’t have time to change the schedule on the website here, but it will be correct in the main program guide.

8:00am       Saturday Morning Superheroes with Isis, Superfriends and
ElectraWoman and DynaGirl
10:00am     Superman: Doomsday (2007) with Adam Baldwin as Superman

For more detais on the Convention go to http://www.starland.com