When Will Smith promoted his superhero comedy Hancock he joked that when the inevitable porn knock-off was made, the schlockmeisters wouldn’t even have to change the title.  Smith was acknowledging the near pandemic frequency of low-brow, low-budget pornographers who hijack mainstream movies and, with little evidence of wit, transform them into adult entertainment. Edward Scissorhands, West Side Story and Saving Private Ryan, to name a few, have been reimagined as the Edward Penis Hands, Breast Side Story and Shaving Ryan’s Privates.  It’s easy to create a lascivious sounding title; it’s much harder to recreate the essence and look of the original source material.

In the trailer, we also see a Batmobile so authentic that I wondered at first if the filmmakers illegally used footage from the original show.  They didn’t; they simply rented a replica.  Familiar sound-alike music punctuates the action, and we are reminded of the cartoon that preceded the series starring Adam West and that words like “Kapow!” and “Thwack!” were sprinkled over fight scenes. 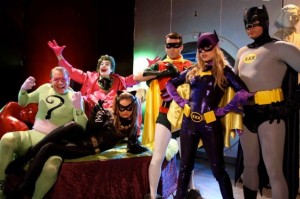 Because fan-films are rarely made as commercial ventures, the fan community was surprised that DC comics (as well as Paramount and other film studios) targeted them, aspiring Christopher Nolans, with legal cease-and-desist letters. The well-intentioned fans were relieved when DC changed its official position in 2008 by stating “We’re against anything that monetizes our assets and our copyrights without our permission. We are not against things where people use our assets if they don’t do anything monetarily with them.”