Marvel’s Avengers gets a new #1

I haven’t really been a Marvel fan since the early 1980s. I used to thrill to John Byrne’s Fantastic Four and Alpha Flight, Frank Miller’s Daredevil, Chris Claremont’s X-Men, Bill Mantlo and Rick Leonardi’s Cloak and Dagger… I even read Secret Wars II and ALL the crossovers.

But in 1986 when DC managed to poach a large amount of Marvel’s talent, I went with them, and found Byrne’s Superman and Miller’s Batman just as thrilling. For the most part I never looked back, a situation helped by the declining quality of most of Marvel’s output throughout the dark ages of the 1990s.

Since then there really hasn’t been much to lure me back to Marvel, with a few exceptions (Ed Brubaker’s incredible work on Daredevil and Captain America being chief among them). My taste for big crossovers has faded sharply since those heady Secret Wars II days, so even though I started reading Brian Michael Bendis’ New Avengers when it started back in 2004, it quickly sank into the fog of whatever summer “event” was going on at the time and lost me. 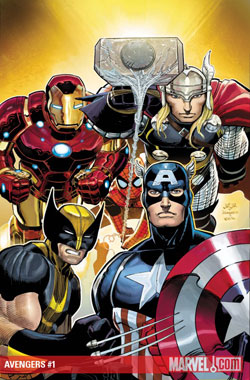 So it took a little work to convince myself to pick up the newly renumbered Avengers #1, by Bendis and John Romita Jr. I do have to admit that the collector’s nightmare of starting a series over with a new number one issue usually works on me – I’ll at least pick it up and look at it most of the time. And I’ve always found Romita Jr’s artwork to be very appealing, ever since he drew X-Men and Star Brand back in the glory days.

The classic Avengers team of Iron Man, Captain America (albeit the new one), Thor and Hawkeye are joined by Spider-Man, Wolverine and Spider-Woman, all favorites of writer Brian Michael Bendis and mainstays of the team since his New Avengers in 2004. It’s a treat to see Romita Jr draw them: his Thor is larger than life (even for a superhero), towering over the other characters, his Spider-Man is lithe and acrobatic, and he remembers that Wolverine is supposed to be short.

While I’m not sure I’ll ever get used to Wolverine being an Avenger, Spider-Man’s presence rings true and seems particularly important, as I imagine his jokey, carefree voice is closest to Bendis’ own. Bendis is a master of snappy dialogue, and he doesn’t disappoint here, although the sheer amount of witty repartee strains credibility a bit – nearly all the characters, not just Spider-Man, are a little too quick with the jokes. The “menace from the future” plot is extremely tired, but the surprise reveal at the end of the issue made it look like things may not necessarily be what they seem.

It was certainly intriguing enough to make me want to read the next issue, which is the ultimate goal of any monthly comic book.