It seems to me that so far, movies based on DC Comics properties fall into three broad categories. On one end of the spectrum we have well made films by directors who understand the material, such as Christopher Nolan’s Batman Begins and The Dark Knight or Richard Donner’s Superman the Movie. In the middle, well-intentioned near misses like Superman Returns, V for Vendetta or Zack Snyder’s Watchmen. And on the other end, studio-manufactured disasters like Constantine or the Joel Schumacher Batman films, formula summer “event” movies made by people who are only interested in replicating the success of previous films.

So where does the Jonah Hex film fall on this scale?

The film’s credits read “based on the comic books written by John Albano, illustrated by Tony DeZuniga and published by DC Comics,” and while it’s nice that the filmmakers chose to credit Hex’s original creators, the film bears only a superficial resemblance to the Jonah Hex comics of the 1970s and ‘80s. It is much closer in tone to Joe R. Lansdale’s Vertigo Comics treatment of the character in the mid-1990s. Where in the original Jonah Hex stories published in Weird Western Tales there was a subtle atmosphere of dread and wry irony, Lansdale chose a much more overt sense of weirdness, populating his Hex tales with zombies, crazed albinos and other outlandish monsters. 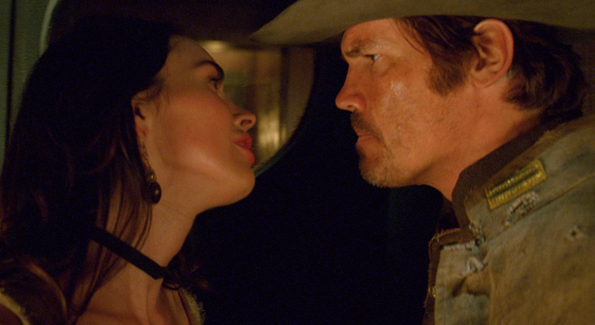 The film doesn’t go quite this far, but it does contain a few supernatural elements, the only purpose of which seems to be to provide exposition for the by-the-numbers plot and a suitably big “save the world” threat for the final act.

The whole movie has a slapped-together feeling to it, as if the filmmakers wanted to make a Jonah Hex film but had no idea what it should actually be about. You can almost hear the producers checking off all the summer action movie elements like a laundry list: tragic hero, check; beautiful woman in peril, check; insane villain, check; explosions and ridiculous weaponry, check; and so on. John Malkovich’s turn as Quentin Turnbull was straight out of the comic book villains’ play book, but at least his presence in the film is necessary to move the plot forward. Megan Fox’s character Lilah seems to be there solely to provide a reason for Megan Fox to be in the movie.  A badly animated origin story and bizarre dream sequence ending seem to be late attempts to address the film’s abrupt scene changes and general lack of any real substance, and even with these rushed additions the film clocks in at a very short 80 minutes.

I imagine he had a hard time acting through the grotesque makeup required to give him Hex’s signature facial scar, but nonetheless Josh Brolin turns in a very one-dimensional performance, trying much too hard to be tormented and sarcastic at the same time, and failing at both. He comes off as a swaggering bully with none of the ironic charm he has in the comics.

Maybe that’s the whole problem. Jonah Hex is an unusual character, not exactly likeable and certainly not a handsome heroic type. Often he is the hero only because the villains he’s fighting are worse bastards than he is. He works great as a comic book character in stories that only need to be entertaining, not carry a film franchise, and maybe his story just doesn’t fit into the cookie-cutter mold of the Hollywood summer blockbuster.

Maybe the world doesn’t need a Jonah Hex movie. It certainly didn’t need this one.