It’s always amusing watching DC Comics scramble to get something into the bookstores to tie in with the release of a film or TV series based on one of their properties, especially if it’s a lesser known one. Last year’s Watchmen was easy – there’s only the one book, and the film was, at least visually, a close adaptation of it. It’s when the film or TV series strays wildly from its source material (as they invariably do) that DC feels the need to help the potential new readers out by making it clear that yes, this is the book they should buy.

In the case of the recent Human Target series a simple “the inspiration for the television series” blurb on the cover of the trade paperback should suffice, but DC chose to confuse the issue by also releasing a new Human Target miniseries based on the show, no doubt their way of compensating for the fact that the TV series, while quite good, bears virtually no resemblance to the comic book series it is based on.

To tie in with the hopelessly ill-conceived Constantine film, we got Hellblazer: All His Engines, an original hardcover graphic novel. Not a bad book, but the central purpose of the plot seemed to be to move the series from its usual British setting to Los Angeles, where the film takes place. Had the movie been successful and spawned the inevitable sequels, the monthly Hellblazer series would likely have been permanently relocated to bring it in line with the film series. Luckily for everyone (except the filmmakers), the movie was a flop, All His Engines was largely forgotten, and John Constantine is back in England where he belongs. 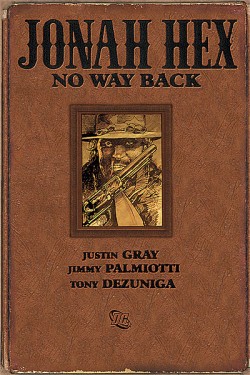 All of which brings us to Jonah Hex. To tie in with the upcoming film DC has just released No Way Back, an original hardcover graphic novel by the current Jonah Hex writing team of Justin Gray and Jimmy Palmiotti, with artwork by comics legend and original Jonah Hex artist Tony DeZuniga.

Thankfully, No Way Back does not appear to be an attempt to bring Hex’s comics continuity in line with the film. Instead it has the more basic task of explaining just why Jonah Hex is such a complete bastard, while also giving some background on El Papagayo, a long time Jonah Hex villain who to my knowledge does not appear in the film.

It is a relentless and unforgiving story that uses many of the standard clichés of the western genre, but still manages to deliver some surprises along the way. Jonah Hex’s night of drinking and whoring is interrupted when he is presented with a wanted poster depicting his long-lost mother, which sends him on a journey to find her and confront her about why she left him with his alcoholic, abusive father to run off with a traveling salesman. From here the story takes some interesting twists and turns, all the while rooted in classic western themes of revenge and redemption.

The writers take great pains to ensure that the cast of characters are as well-rounded as possible, presenting us with a hero it’s very difficult to love, and a cast of villains it’s all too easy to sympathize with. Hex finds himself coming to the aid of a religious community who are willing to do some surprising things to protect their town, and even their leader is steeped in moral ambiguity, with his too-young wife and stranglehold on the town he runs as both preacher and sheriff.

The artwork in No Way Back is less successful. Tony DeZuniga co-created the character and did some phenomenal work on the series back in the 1970s and ‘80s, but here his work is overly sketchy, relying on thick patches of black to fill in the panels. Colorist Rob Schwager does a good job salvaging the art by adding a lot of texture to areas DeZuniga lets trail off. Ultimately, the story is compelling enough that the art doesn’t detract from it, but it is a bit of a shock after the consistently excellent work by a variety of artists that has appeared in the monthly Jonah Hex series. 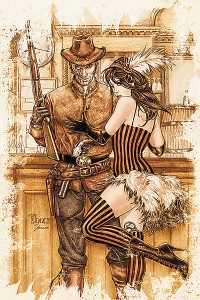 A few months ago in Jonah Hex #53, we were introduced to Lana, a saloon showgirl who bore a striking resemblance to Megan Fox’s character in the film. I remember rolling my eyes when I saw the cover and thinking “here we go…” Throughout the story she behaved as expected, and they seemed to be setting her up as a regular supporting character, thus bringing the comic in line with the film. It was that expectation that made the twist at the end of the story all the more effective.

That’s the strength of what Palmiotti and Grey do, both in the monthly Jonah Hex series and in No Way Back. They’re working in a cliché-ridden genre, so they use those foregone conclusions to set up twists and turns that the readers never see coming.

The filmmakers would do well to do the same.